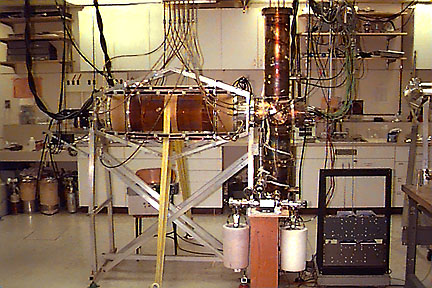 One of the difficulties in using double well neutral plasma traps is the separation of the particles into their respective wells, thereby filling the wells and unmixing the species.  In addition, the filled wells might contain enough charge to shield out the potential and allow the other species to escape.

We will discuss several schemes which may remedy this problem.  We will also present calculations of plasma heating relevant to these schemes, and experimental results.

Figure 2 shows that the plasma drops into and fills wells in a time on the order of 100 ms.  This is a collisional time scale rather than an instability time scale. Consequently, we must act on a time scale of less than 100 ms to maintain a neutral plasma regime.

Two possible approaches to preventing the problems associated with the filled wells are presented in this poster.  The first is to resonantly drive particles out of the well.  The second is to periodically create new empty wells to replace the wells as they fill.

Three methods for replacing a filled well with an empty one are:

One method for replacing a filled well is to have an empty well move into the plasma, replacing the filled well.  As the moving well enters the plasma, we expect it to be antishielded and thus remain empty. We have successfully observed this antishielding in our experiment.  The following sequence of diagrams shows the on-axis potential along the trap used for a moving well.

Another method is to compress the plasma, create an empty well outside of the plasma, and let the plasma expand to its original length (fig. 4).

Yet another possibility is to instantaneously  create a well within the plasma. Because the well is created instantaneously, it will be relatively unfilled.  This well is then moved over to take the place of the filled well.

All of these methods are plagued by excessive heating.  In the course of the plasma manipulations, there are various adiabatic heating and cooling cycles.  Additionally, there are free expansions which heat the plasma.  We find that in our experiments with the moving well and the static well there is net heating.  It seems likely that there will also be net heating for the instantaneous well and the tickled trap.  This may prohibit the useful application of these techniques to neutral plasma trapping.

We considered two models of free expansion heating.  The first model compares the electrostatic potential energy of an electron column before and after an expansion into a region without a well.  The decrease in potential energy results in a temperature increase,

C is a constant, L is the length of the plasma and n is the density.  For typical parameters in our experiment, this formula yields DkT ~ 3 eV.

The second model is a single particle model in which we ignore the plasma self-potential.  Electrons are considered to be moving in the applied gate potential and to obey the Boltzmann distribution.  The following equation, which results from the conservation of energy and particle number, must be solved to find the final temperature.

where x is ef/kT, f is the well depth and Lw is the length of the well.  Typical values are on the order of 10 eV.

In experiments with the static well, we find net heating for a range of initial densities and well depths (fig. 6).  Substantial heating was also observed for the moving well.

In order to confine both positive and negative charges within a Malmberg-Penning trap, the schemes described in this poster may not be adequate.  While we can succeed in replacing the filled wells with empty wells, the amount of plasma heating may preclude the application of these techniques.