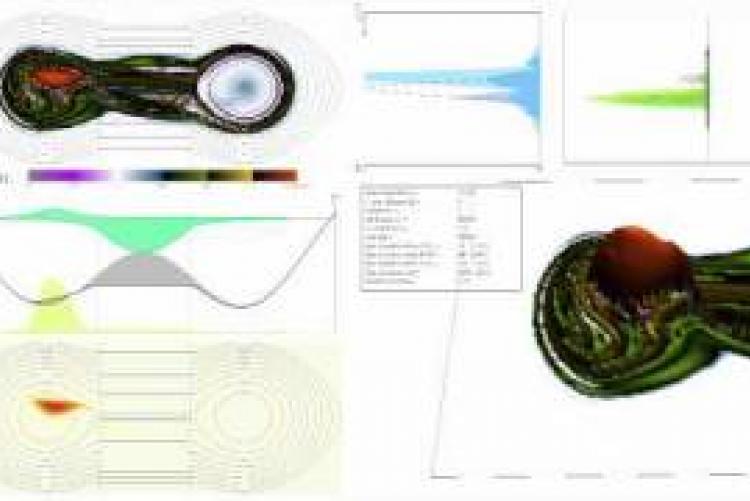 Video is a Vlasov-Poisson solver based on a version used in [1] by Prof. Friedland has been adopted to simulating the autoresonance mixing scheme used in ALPHA. Together with the two previous solvers, various interactions between positrons, antiprotons and external electrostatic potentials are modeled, including space charge effects and Fokker-Planck collision. In this animation a antiproton cloud is being autoresonantly excited and injected across a positron plasma by oscillating an upstream electrode and chirping its frequency across the linear resonant frequency at the bottom of the antiproton well.

When driven with an appropriately chirped pump, the amplitude of certain nonlinear oscillators and waves can grow without bound. As the pump frequency is chirped towards the resonant frequency of the wave, the pump and the wave will phase lock at very low wave amplitude.  When the pump reaches the linear resonant frequency, significant amplitude growth begins.  Thereafter the amplitude of the wave will be such that the nonlinear wave frequency matches the pump frequency.  This phenomenon is called autoresonance, and is well known in accelerators, but has not been seen experimentally in a wave.  Experimental results are in remarkable agreement with theoretical predictions.

Autoresonance occurs in many systems.  Here we will briefly describe the theory for a pendulum, but most of our experiments were done with the diocotron wave in a non-neutral plasma.  The diocotron wave is a very high-Q oscillator which comes about because of the interaction of the plasma with the trap wall.  Click on the movie of a diocotron at right to get an expanded view.

How do you drive a nonlinear oscillator or wave to high amplitude?

You can use feedback to continuously adjust the driving frequency...this is how we push or pump a child's swing, subconsciously modifying the push or pump frequency to stay in phase with the swing.

But what if we can't (or don't want to) use feedback?  For example, we might not be able to measure the oscillator's phase, and could not adjust the frequency appropriately.

A very general property of driven, nonlinear oscillator systems is that, under certain conditions, they will automatically adjust their amplitude to stay matched with their drive.  By sweeping the drive frequency appropriately, we can control the oscillator's amplitude.  This phenomenon is called autoresonance.  An animation gives an example for a pendulum.

Our experiments have been performed with the diocotron wave in non-neutral plasmas.  Typical results are shown in the graph below.